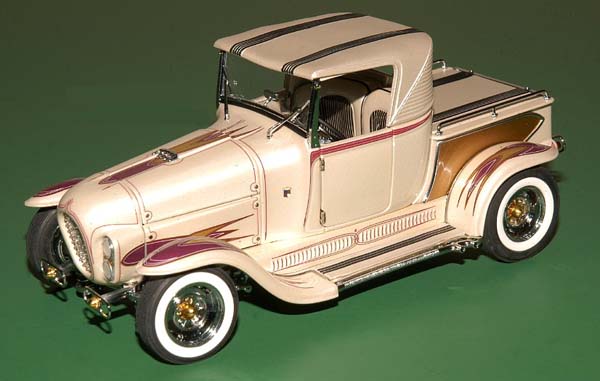 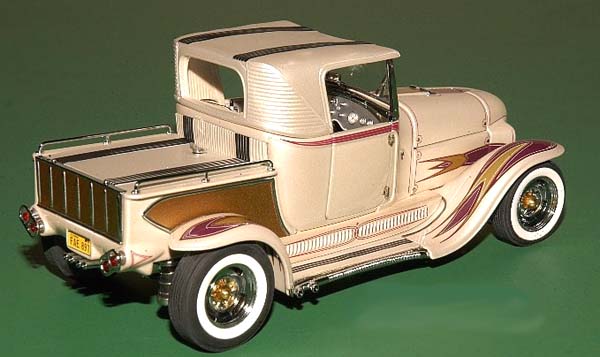 George Barris grafted the front end of a ’29 Model A Ford to the stern of a ’27 Ford Model T to create what the Oakland Roadster Show dubbed “America’s Most Beautiful Roadster” two years in a row (1958 & 1959).

DM’s 1:24 scale image of the Ala Kart is a small one – for the original roadster is a small car. And what a little jewel it is. It’s hard to believe the amount of features and stylistic flourishes that are packed into such a small vehicle. Barris maintained the overall “look” of the original Fords but seemed bent on adding modern touches like quad headlights, canted, raised taillights and a molded radiator shell surrounding a custom grill studded with Lucite rods. To a Swedish Pearl paint job, Barris added gobs of chrome above and below, with purple and gold scallops and pinstripes everywhere. Pleated Naugahyde was used for the upholstery and convertible top – and was even used on the undercarriage! DM has recreated this stylistic UN faithfully in 1:24 scale. Features include a full working suspension, a three-piece, removable hood and an exquisitely detailed scale replica of the Hilborn-injected Dodge Hemi engine. It makes you smile just to look at this little gem of an image.