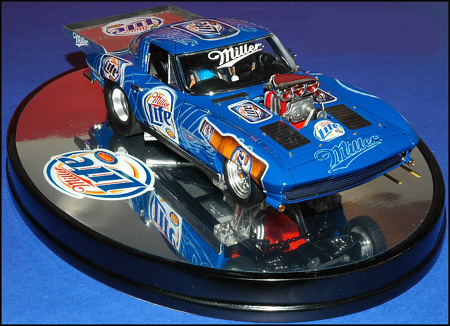 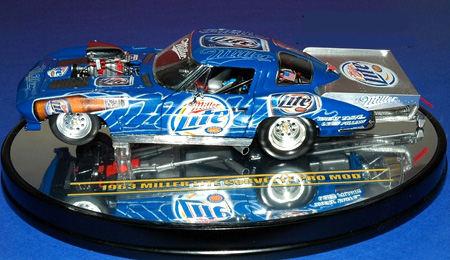 The DM 1963 Corvette in its Pro Modified drag race configuration is still tied as the king of detail, to my mind, along with the other two previous issues and one other. The initial Pro Mod ’63 Sting Ray in silver-blue blew me away when it first debuted in 2002. The awesome engine detail alone raised the bar of precision diecast model-making craft and the hairs on the back of my neck simultaneously. The Coca-Cola livery added some realistic racing heritage to the same model when it was released in 2004. The other king of detail is DM’s 1966 Penske Sebring Corvette, issued earlier this year. The Miller Lite livery, here, adds that same realistic racing touch. The graphics are absolutely astonishing. All else is the same on the model, save for the base. But before I question its relevance, let’s look at it from an unbiased viewpoint. It is made of heavy materials, oval in shape with black felt on the bottom and a gold label declaring it, among other things, as an adult collectible. No doubt, this is due to the alcoholic nature of the livery and use of Miller Brewing’s name. Up top is a reflective chrome-like plate that shows off the car’s underbelly. A band on the bottom spells out, “1963 Miller Lite Corvette Pro Mod” and across the top portion we read the Miller Lite logo. The model is attached via a clear plastic stand beneath the engine making the car appear as if it were doing a wheelie. The rear end is held in place with a less obtrusive black stand.