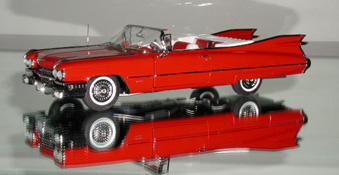 This was the age of jet styling cues, mine-is-bigger-than-yours and chrome, lots of chrome. Some of these '50's cars featured massive fins and rear bumpers that mimicked jet aircraft afterburners. They were the size of two small economy cars, of today's age, lined up front to back. Chrome outlined most every part of the automobile's form from bumper to bumper.

Danbury put this model together in September of 1992. The technology of that era did not generally lend itself to such features as plug wiring, operational suspension or much in the way of photo etched parts but the image was nonetheless eye catching and appealing. The interior is made up of genuine leather carried out in red and white. The front bench seat has a fold-down armrest. The dash and door panels are well detailed and the chassis, trunk and engine compartment are well appointed. The door latches are spring assembly units and snap the doors shut in perfect alignment, no gapping whatsoever. This was a welcome relief of the dogleg hinges back then, and just as welcome now for that matter. If you really wanted to show off in 1959, this Caddy was a great way to go. But paint this land yacht red and the attention was even harder to avoid.