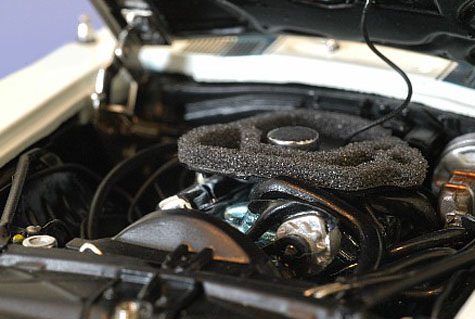 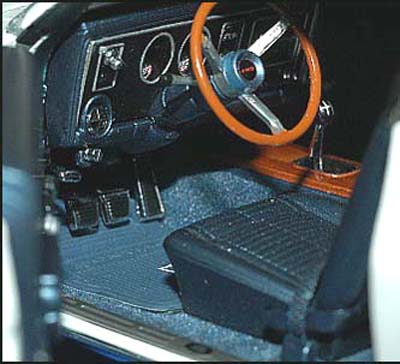 Finally, a 1:24th scale precision Trans Am diecast to die for. The first year Trans Am may be the quintessential collector car for the Firebird/Trans Am aficionado. Firebirds first debuted in 1967 but for the 1969 model year Pontiac decided to add an almost anonymous option package aimed at the Sports Car Club of America’s (SCCA) Trans Am racing series fan. Called the Trans Am Performance and Appearance Package, 689 specially equipped Polar White with blue racing stripes Pontiacs were built in coupe form. Only 8 were made as convertibles. Pontiac paid a reported license fee of $5 to the SCCA for each unit built for the use of the name, Trans Am. The Performance and Appearance Package boosted the Firebird’s price by $725. The car received a driver-controlled ram air hood with functional intakes. The reverse twin fender scoops on each side panel were also functional. They served to exhaust engine heat. The tail received a 60-inch spoiler.

Not until now has any diecast maker done total justice to this rare breed of Indian. The Pontiac legend and late 60’s iconoclastic automobile gets it just reward from Danbury Mint. Perfectly shaped, formed, perched on working suspension and detailed to the heavens, this replication literally shines brightly. The paintwork is typically flawless and looks ready for a concours event. But it is the detail-laden quality of the model that beckons your full attention. Trust me on this one; start your inspection at the back of the replica and save the best for last. Not that the rear of the car is any disappointment, it is not. In fact, we’ll end our tour there for a surprise. When opened, you’ll see the jacking instructions displayed correctly under the trunk lid. You’ll also see the simulated rear foil mounting points. Fabric flooring coats the floor. The jack base holds down the spare tire and the jack itself can be seen peering from beneath it. While back here go ahead and marvel at the red painted photo-etched Firebird logo. Two more adorn the far rear fender areas. These were actually side markers disguised in the logo. Side markers, of course, became mandatory in 1968. Photo-etch metal sills welcome you into the interior as well. This space is a detail-hungry collectors haven. Fabric seat belts, folding visors, flip-forward seatbacks, floor mats, front and rear, a dazzling dash and faultlessly fashioned foot pedals. Oh yeah, you can even read the shift pattern on the shift ball. Cool. The doors have hidden hinges. The antenna functions.

Enough drooling, wipe your mouth and let’s look at the price of admission. Slowly open that hood and hold your breath. I’ll wait. Ready? Look at those hinges. As realistic as anything DM has ever done. The engine is plumbed and wired so precisely that it looks absolutely real. There are metal lines, tubes, cables and hoses everywhere. The carburetor intake is metal and the hood seals to the engine with foam as perfectly as the real car. DM even fashioned perfect metal line to rubber hose tubing, a spring hood latch receiver and check out the master brake cylinder paint; awesome authenticity. You’ll note that the front suspension cradles move up and down as the wheel articulates. Even the front air dam was built right. Ok, look at the rear license plate. It is metal. It is hinged and it folds down to reveal the gas filler. Surprise! DM, you thought of everything. You may think that you do not need this model but if you see it in person, you’ll have to have this car. A solid 5 star effort.

from the "The Peterson TLC" Danbury Mint Collection