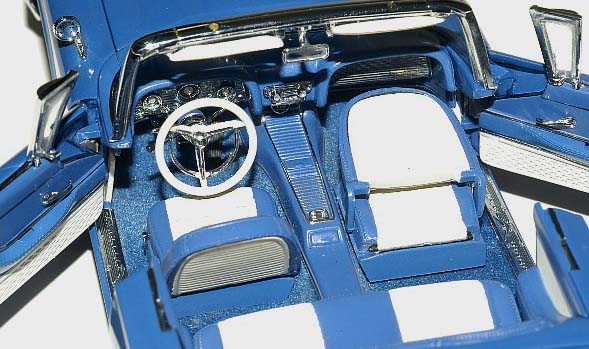 With the addition of quad headlights, a cube-like roof and lack of rounded body lines, the cars were termed, “Square Birds”. They were well accepted and the ’58 was named as Motor Trend’s Car of the Year. With a new unitized body, all new 352 cubic inch V-8 and very well appointed cabin, the T-Bird was now being touted as a, “Personal Luxury Car”.

Danbury has captured the unmistakable flair of this automobile perfectly. True to the era, many of the square bird’s styling cues, as with a good number of marques in the late fifties, were taken from aeronautic design menus. DM wonderfully replicates the side spears that appear as external rocket engines sweeping rearward. Above them, the car’s tailfins provide rudder stabilization while the taillights take on the appearance of afterburners. Even the, "Fashion Ray" wheel covers gave the car a futuristic look in '58. The diecast sits true and level and their color choice is period superb in the lovely Monarch Blue with a Winterset White top. Of course this is an all-new tooling and with it came some challenges but also, some new advances. For instance, the rear bumper is removable. You may choose to replace it with the supplied extended bumper with continental kit spare tire. With the continental spare, there is a small black square panel that lifts up to reveal the cap and filler neck. On the standard bumper the cap behind the license plate is visible once you flip the plate down. DM has thoughtfully supplied us with a pick-type tool.

Borrowing technology from their ’62 Thunderbird and improving upon it, the trunk lid is a marvel of precision  diecast detailing. The internal hydraulic systems replication, metal hinges, wires and materials are outstanding. The jack lies at the rear of the trunk amid wires and working hydraulic pistons. As with the real car, there is a folding panel on the forward edge of the trunk lid that unfolds and extends to fill the gap behind the seat when the top is down. Trunk fabric liner and a removable spare tire.

Seat patterning is deeply scored and stitching can be seen outlining the tops and side bolsters. The dashboard has been intricately detailed and the floor pedals and carpeting are flawless. The doors are on those marvelous internal hinges and even the door kick panels are treated to nicely embossed texturing. The visors fold forward or under, the passenger seat back folds flatly to allow rear passengers access to the rear cabin and stop for a minute to examine the rear windows in their down position.  The top has two realistic welt seems, one on top at the rear and one along the bottom edge.

The engine compartment features all of the best detailing we have ever seen in precision diecast and more. Danbury does such a good job with heater hoses and their metal holding clamps. Equally as impressive are the bright metal wires simulating the transmission fluid lines and fuel lines. The plug wires, radiator overflow tube and coil wiring are astonishing. Following the fuel lines downward you find yourself at the fully detailed fuel pump. There’s a wired starter, trans cooling lines, emergency brake cabling and some of the best suspension systems you have ever seen. In the rear, the trailing arm suspension operates on real coil springs and functional shock absorbers. The front system works on coils but the steering system is the bigger news here. The tie rods act realistically but the power steering piston also operates. An absolute must have for any Thunderbird collector....big or small!