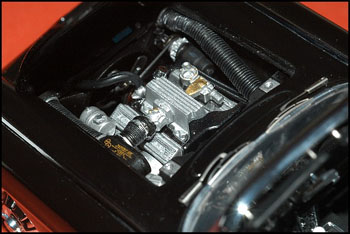 This is a standard reissue of the Roman Red model that Danbury originally released in the beginning of 1997. In the engine compartment there are warning instructions printed on the air cleaner housing and the hood latch receivers are now silver instead of black. The movable sun visors are no longer glossy but the correct matte finish. Other than that the model is a triple black version of the red machine. The exterior Tuxedo Black shines like liquid glass on a moonless midnight. The interior, like the red iteration, is black and the removable hard top is jet black also.

The model has a full working suspension, fabric belts with photo-etched buckles, removable spare, retractable antenna and a complementary array of engine details under the hood. Fit, finish, stance and overall quality are what we’ve come to expect from the Danbury folks.