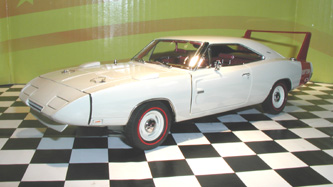 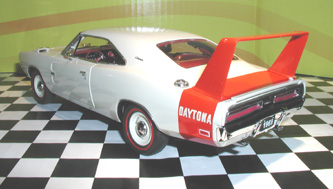 NASCAR was starting to become big business in the late sixties. Dodge was at the forefront of success in that racing venue and they sold streetcars on the Monday following race day as a result of their success. In order to qualify for stock car racing, Dodge was required by NASCAR to build 500 examples of their racecars for the public. Dodge built 503 Daytona’s. Of the total, 433 were equipped with the 440 engine while only 70 were built with the elephant motor, the 426 hemi. For outrageous performance, aerodynamically, they sported an 18-inch long fiberglass nosepiece and an even more outrageous two feet tall wing. Mounted on the rear fender deck, this down force-providing implement yielded aircraft looks but worked immensely well at race speeds.

The Danbury boys were at the forefront of success with their yellow 1969 Dodge Charger R/T, issued in 1999. The core collectors scored this a major Mopar touchdown. DM capitalized on the tooling, in 2001, with a popular release of the “General Lee” from the TV show, “Dukes of Hazzard”. But lest you think the Daytona is either one of these versions with a wing glued on and a Jimmy Durante proboscis stuck to the grille work, just correctly consider this a whole ‘nother first and goal to go.

The first difference you’ll spot is the rear window. Flush mounted, it becomes part of the sail-back roofline with shorter trunk lid. The R/T sported the recessed backlight and standard-sized trunk lid. The spare is mounted far forward, almost out of sight. Just beneath the trunk lock, you will see a fabulously polished photo-etched, “Charger” emblem. It matches the two on either side of the roof behind the rear window openings. As with the R/T, the gas cap opens. The suspension continues to amaze as the rear springs and shocks articulate in perfect unison. The front torsion bar suspension is even better. The entire cradle and steering mechanism works like the real thing. Before you turn the model upright, take a minute to appreciate the under view of the inside front fender. Those fender mounted reverse scoops are real. They not only cover real holes in the fenders, but the openings are covered with photo-etched mesh as well. A nice touch that we could have easily overlooked. The interior and engine bay score massive yardage. Like the R/T, the dash gauges, seats, belts and console are knockout. The engine bay is a real treat too. The 426 is different than the one in the R/T. To my taste, better detailed. The heater hoses are more prominent; held in place by a photo-etched clip. Plug wires are properly scaled and tiny metal wire replicates master cylinder lines. The hood, replete with miniature springs, is held in place with working hood pins and wire tethers. It’s easy to open, slightly harder to fasten down but well worth the detailing touch. And, like the R/T, the Daytona version features hidden headlamps, though using a different methodology. The R/T lights are hidden behind flip-up doors in the grille, opened by using a small plastic tool included with the model. The Daytona’s lamps pop-up from the nose cone, operated by a hidden button on the underside, similar in design and operation to DM’s beautiful ’68 Corvette replica.

The color combo, boy racer wheel and hub cap treatment and the overall nostalgic look of this piece makes it a true ‘must-have’ for any car collector. The Daytona will provide you with a rapid trip to the collecting end zone. DM deserves a full 5 stars for this beautiful effort.